Many writers had pets. Some were immortalised in the works. Others were just wordless assistants and faithful companions in the lives of novelists. Among the authors of the world’s bestsellers, there were and are many lovers of keeping dogs at home. And in some of them, this love was so great that it was reflected in their literary work. In such cases, we can safely say that many brilliant literary pieces were born because of the four-legged friends who were always present with some famous writers.

In this article, you’ll learn how dogs inspired Stephen King’s thrillers, how Walter Scott named a new breed of dog, how the death of a pocket dog made Edith Wharton write masterpieces, and how brutal modernist Gertrude Stein learned to write from a poodle. But most importantly, we’ll answer why a dog is considered a writer’s best friend and how exactly this animal can influence the creative process of writing.

Everyone knows that the dog is a human friend who not only gives positive emotions daily but also provides tangible assistance performing the role of a guardian, shepherd, therapist, detective, and even babysitter for your kids. It is the first animal that ancient people domesticated.

They shared food with the dog, and the dog helped in the hunt and guarded ancient people and their homes. And this precious friendship continues to the current day. But did you know that a dog can also act as a creator or a muse for great writers? Whatever your answer, what you read next is sure to surprise you.

Dogs Inspire the Creation of Thrillers

One day during a morning jog back in 1999, Stephen King was seriously injured: he was hit by a car. The driver pulled over because he was distracted by the dog sitting in the passenger compartment. This accident caused King to become bedridden for a long time. And it was his dog who helped him recover.

A faithful friend and writer’s inspiration was a Welsh Corgi Pembroke named Marlowe, who also became the dog prototype in The Dark Tower series. In one part of this work, the king of thrillers and horror introduces himself as a character of the book, describing the touching relationship between the writer and his dog. King later included his other pets in his literary works, and several books mention dogs of the Welsh Corgi Pembroke breed.

Now the author’s primary muse is corgi Molly aka the Thing of Evil, which helps King come up with horror stories. But there are some things that dogs, no matter how smart they are, can’t handle. And we’re talking about statistics homework here. But don’t rush to get upset because Trust My Paper writing service will help you.

British classic Walter Scott also adored dogs. He kept representatives of different breeds: beagles, greyhounds, terriers, and dachshunds. And one of his four-legged pets, Camp the Bull Terrier, was Scott’s faithful walking companion until his age. The writer loved to climb rocks, thus training the muscles and joints of his fingers, and during such climbs, Camp was always there, helping the owner to choose the most convenient way for it.

Scott allowed his pets to enter his library and his office while working. The writer wrote quickly and extensively, but the four-legged pets didn’t interfere but helped him create. Until his last days, Scott invariably surrounded himself with dogs: his beloved pets would sit by his chair, and he would start stroking them, laughing at them, or sobbing sadly.

Many of Walter Scott’s paintings depict him with his dogs. And in Edinburgh, you can see a monument showing the writer with his beloved dog Maida at the entrance to his house. By the way, the Dandy Dinmont Terrier breed was named so, thanks to Walter Scott.

Having once seen these funny dogs, he was so fascinated that he made the characters of his historical novel “Guy Mannering, or the Astrologer.” One of the main characters in work, Dandie Dinmont, kept dogs, each whose nicknames corresponded to its coloring. The novel proved insanely popular, and the breed was subsequently named after the character Scott invented.

The Death of a Sofa Dog Made the Writing of Masterpieces

The American writer, journalist, and designer Edith Wharton was very fond of small dogs, with a particular preference for the Chihuahua breed. She was madly in love with them, carried them on her shoulders, and gave them even more time than her husband, who often resented her.

Sadly Edith’s canine longevity is short, and occasionally she had to bury her pets and even had a graveyard near her home set aside for them. With the death of one of her pets, a dog named Mimi, Edith suffered so keenly that she fell into a deep depression. And taking up literature helped her to cope with her troubled thoughts.

Passionate about the creation of stories, she forgot about her grief. That is how Wharton’s famous novel “Abode of Joy” appeared. And almost 20 years later, Wharton won the Pulitzer Prize for her other book, “The Age of Innocence,” becoming the first woman in history to receive this honorary award.

The Brutal Modernist Learned to Write from a Poodle

Gertrude Stein was a famous modernist writer of the late 19th and early 20th centuries, known in France and America as a mentor to young writers, a friend of Hemingway’s, and the author of the famous term “Lost Generation,” which later became an epigraph to his novels. Among other things, the literary activist kept several dogs at home. But an especially reverent Gertrude treated a pet named Basket.

This poodle was known all around the writer literary bohemia of Paris. So Gertrude, along with her friend and companion Alice Toklas, cuddled him, considering him a full-fledged family member. And, of course, Baskett helped Gertrude in her creative work. The poodle was famous for breathing very loudly, and, according to the writer, it was by listening to his breathing that she learned to “catch the difference between sentences and paragraphs.”

In the preface, we promised you an answer to why a dog is of such great value to writers. First, dogs can be compared to bioenergetic accumulators; they need to give the accumulated positive charge to the outside from time to time without any discomfort whatsoever. Second, the dog increases the vitality of its owners, gives them a rush of activity and joy, and lifts their spirits.

And these qualities of pets play a huge role for writers, as creative people have an increased risk of anxiety and unipolar depression. Third, the presence of a pet calms its owners, so it becomes easier for them to manage their attention and be optimistic about what’s happening. And if you want more information on this topic, use the Best Writers Online writing service review website, where you can find an experienced essay writer to help you.

As you can see, the dog is a unique animal that plays a special role in the lives of creative people. Have you wondered why that is? Perhaps because a dog is the only animal that can recognize human emotions and provide support and positive energy to its owner when they need it most. What do you think? Share your opinion in the comments. 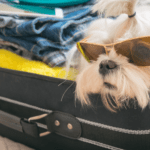