Christmas just wouldn’t be Christmas without overindulging in food. Whether it’s gorging on too much turkey and trimmings, munching too many mince pies or going a little overboard on baileys it’s just part and parcel of that festive feeling.

As all dog owners know it’s hard to eat anything without getting forlorn looks from our furry best friends. Difficult as it is to refuse our pooches pleading glances it is essential to be discerning this December.

This is because, unfortunately, many of the festive treats us humans love on 25th December are toxic and extremely dangerous to dogs!

Read on to find out which Christmas foods need to be left well out of reach of your dog.

Dogs should never consume mince pies. They contain raisins which can be poisonous to our pooches by causing acute kidney failure. The worst case scenario that could result from this is death.

In addition to raisins this applies to grapes, currants and sultanas. Even small amounts of these fruits can cause severe health problems so keep them out of reach of dogs.

While raisins are toxic for our pooches they are not the sole reason mince pies should be avoided. They are also high in fat and sugar which can upset dogs stomachs and digestion. Even lower sugar options often use xylitol as a sugar substitute which is extremely toxic to our dogs.

As if you aren’t deterred enough already, mince pies usually come packaged in foil which an excited dog could easily ingest.

Other Christmas Foods That Are Toxic To Dogs

Mince pies are a big risk to your dog at Christmas because of the combination of toxic raisins, high fat and sugar or even xylitol in the pastry and the choking risks associated with foil wrapping.

However these dangerous little treats only scratch the surface of Christmas foods that are toxic to dogs:

While not technically food rawhide chews are a common present for dogs at Christmas. It is understandable why as they come in bright colours and festive shapes and are often marketed as stocking fillers for pooches.

However, we recommend buying alternative chews for your dog this year.

Rawhide chews are made by the leather industry, a way to use up the inner layers of horse and cow hides that would otherwise go to waste. These hides are shaped into chews after going through many processes. The process might include:

1)Being soaked in chemical baths or high salt brines

2) Chemical washes to remove fine hairs on the hides

3)Hides being whitened with bleach, hydrogen peroxide or other harsh chemical treatments

Some of the chemical substances used in these processes are toxic and while steps are taken to remove traces some may still remain. This can lead to irritation of your dogs digestive system. As an animal byproduct there is also a chance that the rawhide could carry contaminating bacteria such as salmonella.

These products are intended to be inedible and only for chewing but as the rawhide ages it’s possible for pieces to break off. If swallowed, these pieces can get stuck in the oesophagus or stomach tract which can damage tissue lining. These obstructions may lead to surgery.

A lot of companies flavour these products with meat flavouring to make them more appealing to dogs. However, because they are not classified as food there is little regulation on their production.

Thankfully, there are alternatives that are much more suitable for your dogs and with far less risk. Many chew toys are now made of natural and durable rubbers which are easier on teeth and jaws but still satisfy the urge to gnaw and bite.

Ginger can be healthy in small quantities. However, gingerbread often contains nutmeg, which is dangerous for dogs, particularly when consumed in large amounts. Nutmeg contains a toxin called myristicin which doesn’t agree with our canine belly.

It’s also worth mentioning that gingerbread is high in sugar and fats. That being said we have whipped up our own dog friendly Gingerbread recipe which you can find here.

This is definitely a food to avoid as there are multiple ingredients that are poisonous to pooches. Both Christmas pudding and fruit cake usually contain sultanas, raisins and nuts (macadamia). All of which can have disastrous effects on your dogs stomach and digestion.

While raw bones are fantastic to include in your dog’s diet, cooked bones are a bad idea. Raw turkey or chicken bones are rich in minerals and are good for their teeth. When cooked however, these bones easily splinter and could damage your dog’s stomach, bowel and throat.

While raw bones are much better than cooked an inappropriately sized raw bone could damage your dogs teeth, particularly a puppy. It is wise to get guidance from your vet on the appropriate bone size.

There are Christmas foods and drinks that are toxic to dogs containing alcohol.

While no one would ply their pooch with pints it is not impossible for it to be ingested by accident. Whether present in food that they accidentally ingest or spilled drinks, alcohol should be treated with great care around canines.

Be weary of leaving your drink on the floor as a curious dog could easily lap some up and have a nasty reaction. When a dog is exposed to alcohol it causes depression of the CNS (central nervous system). This can slow their breathing and heart rate and alter their blood chemistry.

It may even lead to drops in their blood sugar levels that could cause seizures or even brain damage. Certain alcoholic drinks are more appealing to dogs such as cream or egg based ones which are popular around Christmas.

Dogs will snuffle chocolates given half a chance and with the amount of chocolate around the house at Christmas caution is required. Keep any chocolate far out of the reach of your pooch. Chocolate is a Christmas food that is toxic to dogs and depending on factors like the size/weight of your dog and the amount consumed it could cause serious health issues.

Darker chocolate is more toxic to dogs because there is more cocoa powder. Chocolate also contains a substance called theobromine as well as caffeine. These two compounds speed up heart rate and stimulate the nervous system of dogs. It is very hard for them to metabolise these.

Unfortunately, many peanut butters contain xylitol which is used as a sweetener. It is also toxic to dogs. Many Christmas sweets have peanut butter in them so be cautious with your dog.

Keep your pet away from blue cheese such as stilton. The fungus in blue cheese produces a substance called roquefortine C which can cause vomiting, diarrhoea, high temperatures and even seizures.

High fat cheeses can cause vomiting and diarrhoea.

These nuts can make your dog appear weak and drowsy, even wobbly on their feet. Vomiting, tremors and high temperatures are also common symptoms. These symptoms usually manifest after 12 or so hours after the nuts have been ingested.

At Christmas time macadamia nuts come covered in chocolate for a festive treat. This presents a double risk for dogs so extra caution is advised.

Signs & Symptoms To Look Out For

You might not always notice when your dog pinches a morsel that will cause them distress. However there are definite signs and symptoms you can look out for that will tell you your dog has ingested something toxic.

If you suspect that your dog has ingested something toxic then take them straight to a vet or an emergency pet hospital.

Now Bring Us A Furry Puddin’

In summary, eat all of the mince pies your heart desires this December, just keep them out of reach of your pooch. There are many Christmas foods that are toxic to dogs so make sure they stick to their own diet.

Wondering what fruits your pooch can eat? Check out our fruity article here. 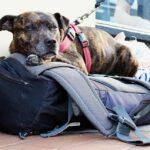 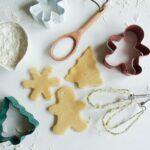