Rachel and her dog Missy love adventures, and always share all of the hidden gems they visit with us. This year they went on a Winnie the Pooh adventure holiday in the dog friendly East Sussex, home of the Hundred Acre Wood and the all-important Poohsticks Bridge. Over to Rachel to share her holiday tail.

Woah woah woah, expotition? What does that mean?

Definition: An expotition is an expedition taken part in, or led by Winnie-the-Pooh.

Okay, so now we have that out of the way, our tail can begin. The plans for our ‘expotition’ were rather simple: stay near Hartfield and wing it from there. The two destinations on our ‘must-see’ list was the Pooh Sticks Bridge and Pooh Corner.

A lot of people assumed that we were holidaying somewhere without much to do, but in the end, we ran out of time to do all the things we had discovered close by. Here’s an overview of our holiday and what we loved the most about the dog friendly East Sussex.

“As soon as I saw you I knew a grand adventure was about to happen.“

When booking, we were spoiled for choice with dog friendly AirBnBs. So we chose one which was only 15 minutes from Hartfield, home of Winnie the Pooh.

We arrived a little early for check in and so investigated some of the nearby walks in the Ashdown Forest. The land is primarily heathland, which is protected in its own right, and it goes on and on for as far as the eye can see. The landscape is a rolling sort, very different to our Scottish hills and peaks back home.

Thankfully, heathland is also the kind of place Missy like best. We spent two hours rambling about, keeping an eye on the distant Friendship Clump so as not to get lost, and simply marvelled at out good fortune. March is a dangerous time for holidays, and we had packed jumpers and coats, fleeces and hot water bottles, and here it was, bright and sunny and warmer than a Scottish Summer day. That perfect rose tinted summer of youth, warm and pleasant but not hot and sticky – which was ideal as I always worry about Missy in hot weather!

Perhaps I am a little like Kanga in my old age.

“A true friend is a life adventure“

Tuesday was the day. We had on our Big Boots, which are required for an Adventure to happen. We had packed our teddies: Pooh, Piglet and my very sad and well travelled Eeyore, and set off on the Winnie the Pooh Walk. We saw the enchanted place, and lost count of the trees, found the Heffalump pit and Eeyores Gloomy Place. Photos were taken at the North Pole and lastly, the 100 Aker woods.

Next was Pooh Corner. This fabulous teashop and “Pooh-seum” used to be the old sweet shop Christopher Robin visited. The website said dogs outside only, which we were quite happy to do, only to be told when we arrived that it was the discretion of the staff – being clean and well behaved, Missy was more than welcome inside.

We did sit out for lunch and marvelled at the adorable teapots and crockery before I simply sat back and watched my husband become completely overwhelmed in the museum.

Then came the moment. The Pooh Sticks Bridge. We walked from Pooh Corner (they kindly gave us a map) and found our way safely to the bridge. There was almost a sense of a pilgrimage as sticks were gathered and we dropped them into the water, as Eeyore describes, in a twitchy kind of way. “Truly, a wonderful day.”

“You can’t stay in your corner of the Forest waiting for others to come to you. You have to go to them sometimes.“

Wednesday was a “let’s see what else there is” kinda day. I had scoped out a dozen options for the key part of the day before we settled on Battle Abbey. Firstly, it was the most dog friendly option, and secondly, it would be rude not to learn some English history. It was another beautiful day and, opting for the tour which was fascinating (so much so it overran the 1 hour it was meant to be and lasted two), we spent far longer than we expected. Really, we could have spent the whole day there, but I had done a Rabbit and organised a list to get through.

Camber Sands was the next stop (we were out with the bathing season, so no restrictions). We had originally planned to do Rye first, but had overrun at Battle Abbey, so decided to do the walk first. It’s a huge beach, some 5 miles in length (don’t worry, we didn’t walk all of it), and Missy preferred the sand dunes to the water. Still, it was beautiful and she had the chance to run and shake off the cobwebs from her history lessons. We shared a fish and chips between the three of us before setting off to Rye.

I was excited to see Rye as its a medieval town with one of the most photographed streets in the UK (Mermaid Street).

We arrived, found a great wee petshop and then as we left, realised everywhere had shut. Unperturbed, we found Mermaid Street to find it….closed off with a giant JCB on the middle. Hubby just laughed, it would make a good story to tell, really, and I should take a photo of the JCB instead. I did, then found another street of medieval buildings and got Missy’s photo there. It wasn’t a wasted trip, it was nice to look about at the oddly named buildings (such as “the house with two front doors” and “the house with the seat”) before we found a dog friendly pub for our dinner.

“I always get to where I’m going by walking away from where I have been.“

I had come up with all sorts of ideas for Thursday and then Hubby suggested that, since we had come so far for the purposes of seeing the world of Winnie the Pooh, that we should revisit it all again. I couldn’t fault the logic and happily agreed, so long as we got to see the Sheffield Park and Gardens which was only 15 minutes away. I’m always a bit wary of repeating a day exactly!

The Sheffield Park and Gardens are like a Botanic Garden – lots of beautifully organised trees and plants. There were bridges and ponds and trees you could barely make out the top of, they were so large. Its short leads only for dogs going about the Garden, which suited us well as I had decided we were going to keep Missy’s walks to a minimum for the day. At nine, we need to be careful she doesn’t overdo things.

Hubby had tried to book us an afternoon tea at Pooh Corner, but sadly they needed 48 hours notice for that, so we decided we would have a normal lunch there instead. We were recognised by the staff and the owner (as the couple who had brought their teddies with them and the really calm dog) and they chatted away with us, clearly realising that we were just happy to be there. One thing led to another and we found ourselves getting to hold an original alpha bear in the collection – a vintage teddy the same type and age as the original Winnie the Pooh.

I was impressed that Hubby didn’t start crying from happiness on the spot.

After that, I felt we’d had enough excitement for the day and insisted we save the main Winnie the Pooh walk for the Friday morning before going home, and that we just walk Missy to the Pooh Sticks Bridge and back again.

Quite the perfect way to end the day.

“How lucky am I to have something that makes saying goodbye so hard?”

Friday rolled round too quickly. We packed the car, said goodbye to the barn we’d been staying at, and went once more to Gills Lap (or Galleons Leap, as it is referred to in the books). Our aim, having just re-listened to the book, was to look at the lone pine more closely before having a proper explore in the 100 Aker woods. We did try to find Owl, who lives there, but sadly couldn’t. Missy did find some more of Rabbits friends and Relations, but thankfully they came to no harm.

Our holiday in dog friendly East Sussex been a ‘grand adventure’. Warm, almost summer, weather. Stunning scenery and dog walks. A relaxed pace – we’ll get there when we get there. And a very large dose of whimsy.

And tea rooms. Is it really an adventure without tea and cake?

Click here for more ‘tails’ from members of our community. 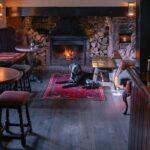 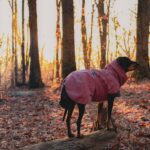