This month we decided to tick one thing of our pup-ket list and to meet up with a fellow Dog Furiendly Explorer @nelthecocker. So we decided on a day out in the dog friendly Formby!

I wanted to give Winston a good day out, so rather than driving, I explored the train for the first time! Thankfully Merseyrail doesn’t charge for dogs so I managed to get a Day Saver train ticket for just £5.50 which gave me access to the entire Merseyrail network for the whole day!

Winston has never been on a train before, so I was slightly nervous about how we would react. However, we left our car at one of Merseyrail’s free car park, armed with a backpack full of towels, water, tennis balls and treats! The first train arrived and after some curious looks from Winston, he realised the treats were much more interesting (thankfully!).

Our train arrived, we got on with no problems and Winston settled quite happily sat on my knee so he could say everything! The first few stops, he got very confused with the doors opening and no one getting on or off, but it provided a new wave of smells for his little nose at each stop!

We had to change trains in Liverpool city centre which took slightly more negotiating as I went for the escalators rather than the lift where I had to carry Winston. More treats whilst we waited on the platform for our next train!

We finally arrived at Formby train station and thanks to google maps, headed down to Formby Car Park to meet Nelly the cocker and her human, Polly! After around a 20 minute walk, we arrived in some very windy conditions!

We made our way down the dunes with the sand battering our faces until we reached the gorgeous open beach! For miles either side, that was all you could see! The dogs had a great time in and out of the water, playing with tennis balls and of course chasing the birds!

After a good couple of hours, we managed to get back to the car via a different route and drove over to The Pinewoods pub for some well-deserved food and drink (and a nap for the dogs!)

The food in the pub was great and very reasonably priced! The dogs had a well-deserved nap and some food whilst the humans chatted for hours! We then continued our journey home on the train, whilst Polly and Nel travelled back home!

But our journey didn’t stop there! We headed back into Liverpool City centre for a wander around and a few errands to run. It’s a very dog furiendly city, and if you haven’t already, check out Dog Furiendly’s guide to Liverpool City Centre here.

We then headed back on a very busy Saturday night post-football train. I did have to carry Winston on the train for a couple of stops, but as he was head height to most other passengers, he loved it and received so much fuss!

Safe to say, after all this activity, Winston earnt a well-deserved tea and a nap for days!

Have you ever visited Formby? We would love to hear about your favourite things to do here. 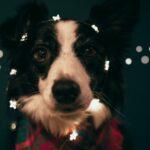 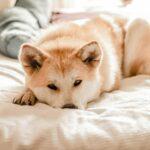