This week’s guest blog comes from our furiend India and her lovable Collie Johnson. India and Johnson have been busy exploring Montgomery in Powys, a weekend filled with dog friendly adventures.

Arriving at (and trying to pronounce) Penllwyn

After a relatively short drive to Mid Wales, with a stop at a service station which involved me getting I.D’d for an energy drink I wanted to buy (legal age is 16, I am 24….), we arrived at Penllwyn Lodges in Montgomery. (Penllwyn is pronounced Pen-lewin, not pen-el-win as I was originally pronouncing it, much to my boyfriend’s entertainment). Penllwyn lodges is set on a stunning site, with a canal running through it surrounded by open farmland, with the lodges nestled on the wooded hillside.

The first night we explored the site, going along the canal which was perfect for our border collie, Johnson, to run along off the lead. I absolutely love exploring and adventure holidays, and everything we picked to do was chosen because it was active, dog friendly and cheap (there was no charge for entry to anything we did, only for parking).

On the first full day, we decided to adventure to Dolforwyn castle. After looking up the opening times, and checking if dogs were allowed, we set off, only to find there was absolutely no need to check opening times. The parking consisted of four spaces just off the side of a country road opposite a very rough track which leads up to the castle.  At the top of the track we found the castle was just open to the elements with no official entrance, and certainly nothing to stop you going at a different time! The views at the top were stunning, looking all down the valley.

There was still remnants of snow from ‘the beast from the east’, adding to the wonderful landscape. We took the path down through the woods which was very overgrown and meandered down to the river. When then followed the river until a lock, which we crossed and followed the country road back to the car park. We stopped off for food at The Bull and Heifer which was a proper pub with an open fire and an eclectic collection of jugs and tankards. The homemade tortilla chips were one of the nicest things I’ve ever eaten.

On the second day we went to Elan valley, and much to the delight (!) of Duncan I suggested a run. I had been informed it was beautiful with well-signposted paths, a perfect opportunity for a run. The first thing you notice is the huge dam at the end of the valley, which powers 800 homes with the electricity produced by the water moving through the generator. As we followed a route through the woodland I couldn’t help but notice the smaller features of the valley, such as the amount of lichen on the trees and rocks, showing how fresh and clean the air is. The steep inclines provided a challenge for us but discovering the view of looking over the reservoir was worth it. Annoyingly the café wasn’t dog friendly, however, we did make friends with a beautiful dog which was also waiting outside!

For the third day, we took a trip to Gregynog Hall – because of our holiday timing it was lovely and quiet, but I can imagine during the school holidays and weekends it is exceptionally busy.

On the fourth day, which also coincided with #nationalpuppyday, we decided to adventure to the nearest beach. Even though we were in mid-wales, Aberdyfi beach was only 90 minutes away. The Sat-Nav took us a very scenic route which was absolutely stunning, with the clear skies and bright sunshine showing off the glacier-carved landscape to its full glory. When we got to the beach, I was genuinely worried there had been a zombie apocalypse; It was so quiet, there were only about three cars in the huge car park and we didn’t see anyone else for a good 10 minutes.

Deciding to brave the risk of zombies because we wanted chips, we bought some proper chip shop chips, from the only food place open. Despite our lack of choice, I was glad we went as they were very admirably looking to reduce plastic waste which for a small shop was fantastic, and so didn’t provide plastic or polystyrene containers for their fish and chips. We took our paper-wrapped chips onto the beach and ate them while throwing a tennis ball for the ever-energetic Johnson. We walked along the beach for a good hour, and there was still more of the beach ahead, I couldn’t believe how long it was, it was a perfect way the celebrate #nationalpuppy day with our puppy.

The penultimate day was spent at Pistyll Rhaeadr waterfall, Wales’s highest waterfall. The 40m high waterfall was set in farmland, with a really cute little café and bed and breakfast just in front of the river. The paths were well worn and pretty easy to follow (although we still managed to get lost…..), with a short or long walk option.  The views along the paths through the v-shaped valleys either side of the waterfall and looking across the u-shaped valley at the top of the waterfall (geography geeks, are you with me?!), were some of the most beautiful I have ever seen.

I am a real sucker for a view and I could sit and drink in stunning scenery all day. After lots of exploring, pictures and me just staring, my boyfriend managed to get me down to the café with the promise of cream tea. I couldn’t believe how close the café was to the waterfall, and it was a bit surreal watching and listening to the water tumble down the edge of the cliff to the river below while eating scones and drinking tea.

On the last day, we were blessed with the weather in double digits (10 degrees celsius!) so we decided to walk along the canal to a pub for Sunday lunch. Our destination was The Horseshoes Berriew, on trip advisor it said very dog-friendly, and even though we sat outside as it was nice weather so it didn’t matter, there were a lot of signs in the pub stating ‘no dogs’. So they might have changed their policy. Their Sunday roast did not disappoint and the roast potatoes were actually roast! (as opposed to many pub roasts having roast potatoes that are not crispy on the outside and it’s like eating a massive, skinless boiled potato). The walk to and from the pub followed the canal and the information plaques allowed us to learn more about it and turns out it’s just for show now, as it is no longer all connected with segments sectioned off to make room for the road.

We had real Monday blues the next day as we traveled back home to Leicestershire. Wales was awesome; we left feeling refreshed, relaxed and I had satisfied some of my cravings for a stunning landscape.

Have you and your pooch taken a little summer holiday break? We would love to hear about your adventures in the comments below. 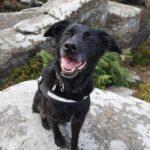 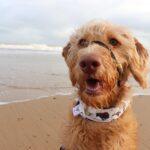