Our Explorers Rachel and Missy went on a BIG adventure this Autumn to dog friendly Durham in the North East of England. Read on for travel inspiration and some of the dog friendly places they found along the way.

Missy is well accustomed to staycations as we tend to do at least one annual UK holiday. We’ve always leaned towards the Northern parts of Scotland or the Lakes when in England, so when we were given the opportunity to explore a whole new area, it seemed like a fabulous idea. We didn’t have a lot of time to plan, and with the threat of new Covid restrictions in the North East, decided to keep planning relatively minimal and wing the week.

On our drive down we decided to stop in and see the High Force Waterfall. I’d found mixed reviews online about the best way to see it; either going to the Rabys Estate and paying, or going to Bowlees Visitors Centre and taking the free walk. With time of the essence and some pretty harsh weather, we opted for Rabys. It was certainly an expensive 20-minute walk with £3 parking and then the £2 per human, but if you are short on time or have mobility issues, then this would be a better option than Bowlees (spoiler alert, we did that at the end of the week).

After checking in to the Heather View Leisure Park (you can read our review in: Our Happy Stay at Heather View blog), we explored the local village and scoped out the route that would double up as the morning walk. Time to make the battle plans, we had a whole County to conquer.

Our first full day was designated to Beamish: The Living Museum. This has been on our to-do list for years, and we finally had a base of operations near enough to it that it was a feasible option for us. We had to pre-book, as most places do these days with Covid, which was unfortunate as it was the wettest day of our holiday. Saying that, we all had raincoats and umbrellas, so weren’t put off and we managed to find shelter for the worst of the squalls.

Beamish, whilst very dog friendly, does not allow dogs in the buildings, so we had to take turn about with Missy, however there is so much to look at that we never really felt like we were idly waiting about. There is reduced staff and some areas have had to be shut owing to the current way of the world, but it was still a really enjoyable day for us – we arrived for opening and were there until it was almost time to close, with a stop of course to enjoy our afternoon tea in the 1950s area.

Being a bit of a Downtown Abbey fan, the Edwardian village was probably my favourite bit, although Missy would say the Georgian farm was her favourite, owing to the pigs and the horses. The gift-shop at the end does allow dogs in, and despite being soaked, the staff were all very pleased to see Missy and she was much fawned over.

Our second full day was in the village of Barnard Castle. The castle there, unsurprisingly called Barnard Castle, is an English Heritage site. Having held our Historic Scotland passes for more than a year, we are eligible into these sites for free (and I’m certain the reverse is true for those thinking of a trip North of the border), so it made sense to bag a few of these sites whilst in the area. Missy is a master of the spiral staircase and has been nosing around castles for years now, and this one did not disappoint.

Again, we had to prebook, and the staff were great with us. We were told where the hidden gems were and got the back story of the ruin before being left to find a sunny picnic spot and then explore. The staff also told us about the walk from Barnard Castle to Eggleston Abbey (which was a general free to visit the site and didn’t require pre-booking) and, emboldened by the bright sky, we went for it (after a stop at the Ringtons café for lunch where we sat outside – there were plenty of dog friendly cafes, but they were all busy, which I like to see).

I’ll confess this now, we are terrible ramblers. Spoilt after years of Scottish Heritage walks where there is a sign every 10ft, we inevitably get lost. So, if anyone wishes to follow this walk, read carefully: after getting to the river and following the sign to the Abbey, you end up in a caravan site. Do not panic. Follow exit signs and then go through the fields following the direction of the river. Eventually you come to a very narrow gate, just squeeze through and follow the road a few minutes and you are there. We, and another couple, all got lost in the caravan site and thankfully got directions from a visitor.

The Abbey is a quaint ruin and worth a stroll about, although we felt some more signs about it would have been nice. There are no facilities at the Abbey, so we didn’t stay too long as the weather had turned and decided to risk retracing our steps.

Quote of the day, from yours truly, “But sheep are really intimidating!”

Our last full day was a revisit to the waterfall. We had done a touristy thing, we’d done a historical thing, so it was time to enjoy some of the nature that is considered part of the North Pennines Area of Outstanding Natural Beauty. We went with the Bowlees Visitors Centre route this time so we could compare the two. The visitors centre is dog friendly (though not in the upstairs gallery) and the staff were keen to explain the routes available to us. Armed with a map, we decided to go and see all three of the waterfalls available.

The Low Force Waterfall was first in line and we had the surprise of a film crew setting up a fallen bridge prop across it. They were very friendly and had left plenty of space for us tourists to go and awe over the falls. Then we followed the very nicely marked path up to the High Force waterfall. There was two viewing platforms, one literally across the river from the Rabys viewing post, and another literally on top of the drop.

To compare the two options, we preferred the second route – Missy is a dog that needs a lot of walking (she did 15miles and was still ready for an evening walk), and we were well equipped to handle the rough paths, however, as I said earlier, the Rabys option is perfect to allow those who may struggle on uneven paths or simply don’t have a few hours to spare, so I’m not going to discredit the option.

After admiring the falls, we decided to give rambling another go. We had a map this time that clearly outlined the other half of the circular route, so what could go wrong? We went over to the Rabys Estate, grabbed some hot chocolate after deciding it looked too busy inside (dogs were welcome, but given the current situation we decided to avoid it), we set off.

It went well to begin with, there was one turnstile we had to pick up Missy and pass her over, but we found the right sign and were emboldened. I’m not sure when we ended up in the wrong field, but have to stress that at no point where we genuinely lost, we were just a field too far over. Eventually we could go no further and had to admit defeat and follow the road. Missy was disgruntled to be picked up and once more handed over a fence like a sack of potatoes, but accepted it with grace and as much dignity as she could muster.

We were only 5 minutes from Bowlees at that point and accepted that perhaps we should give up rambling for another year. In order to redeem ourselves, we made our way to the last waterfall: Summerhill Force and Gibsons Cave. I’m pleased to say we didnt get lost!

And that was us. There were plenty of ideas and options for dog friendly stops on the way home, but with all the castles needing pre-booked, we decided to just pack up and get up the road again. Its safe to say though that we found so many things to do that we are going to have to come back again.

But, perhaps, we’re best to leave the rambling to the experts next time. 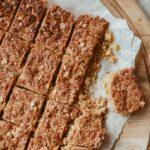 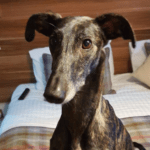