Labradors are good natured, intelligent goof balls who are loved all over the world. This energetic breed is bursting with pride (and plenty of licks) for humankind. As one of the most popular dog breeds, it’s no surprise that there are many celebrity owners. We’ve rounded up some celebrity Labradors owners who deserve the spotlight!

Reese Witherspoon is a loved actress, well known for her character Elle Woods on Legally Blonde. Major is the complete opposite of Elle’s little chihuahua Bruiser Woods, but is showered with the same love and attention. Recently she revealed her black Lab pup, had eaten her couch in a series of posts on her Instagram. She included a poll, asking: “Does this guy look like the culprit?” We think Major is as innocent as the next little pup!

Not to be mistaken for Marley! Jennifer adopted the adorable Lord Chesterfield (we love his grand name) from Wagmor Pets Dog Rescue. Jen has always been a keen dog lover with two older dogs, Clyde the Schnauzer mix and Sophie the black and white Pit Bull. She also has a tattoo on her right foot to remember her childhood pup, Norman, who passed away when she was 15. The reason for getting it placed on her right foot? It’s so he can continue to go for walks with her!

The famous couple are both well known dog lovers, who adopted their black Lab in August 2018. They named the pooch Pula, which of course is quite a unique name, but has such a special meaning. Pula is the currency of Botswana, the south African country that Harry and Meghan visited on their third date in 2016. The pair have assisted with plenty of charity conservation projects since then, including supporting Dr Mike Chase of Elephants Without Borders. Pula also means “rain” in Setswana. Rain is very scarce in Botswana and is therefore seen as a blessing. It’s also Romanian slang for the word penis, but we doubt that’s the reason they named her Pula. Their child Archie is also reportedly a big animal lover and is “best friends with his dogs”.

Captain of the England squad and Tottenham Hotspur, Harry Kane has two adorable labradors called Brady and Wilson. Both are named after NFL quarterbacks Tom Brady and Russell Wilson. Harry has popped them in the spotlight on quite a few occasions, helping to announce his wife’s pregnancy, and sporting NFL Superbowl tops in 2016.

I know Anne Hathaway is cute, but I would love to meet her Chocolate Lab #Esmeralda instead. #chocolatelab #crush pic.twitter.com/jw1VsSMFkB

Anne has a beautiful choccy Labrador named Esmeralda. Her faithful companion is around 12 years old, and been a devoted friend, even when times were difficult with depression. Anne loves walking with her Lab alongside her new rescue pup Edward!

The chart-topping singer introduced her new pup Dexter! She adopted Dexter with boyfriend Anwar Hadid, and recently celebrated his first birthday with a very special party! The party included all of Dexter’s pooch pals, and big drool-worthy cake.

Star of Geordie Shore, Vicky Patterson has wanted a dog for a long time. She recently adopted one from Dogs Trust, after being rescued from the clutches of illegal smugglers. Vicky has openly shared how much of a handful Milo has been during his mischievous puppy years, and has since come under plenty of trolling and unpleasant comments. Despite those mean comments, she has shared just how much her life has changed forever because of him, and what she lacks in knowledge, she makes up for in love. We think you’re doing a cracking job Vicky!

We do love our celebs who love dogs! Drew Barrymore and her dog, Flossie:) pic.twitter.com/8iPUEvmZ

Flossie is a heroic pooch, who soon became a lifesaver in 1998. A fire started outside Drew’s house, and Flossie “barked and literally banged on the bedroom door”. Sadly, 70 firefighters were unable to save the house, but loveable Lab Flossie definitely saved Drew’s life. Sadly, Flossie died in 2010 at the age of 16. Drew traveled all the way to India to scatter her ashes at Gandhi’s home in New Delhi.

Kerry is a total dog lover, which is often shared on her social media channels. She recently lost her gorgeous Labrador Paddy, at the incredible age of 17. Controversially, Kerry has since invested in a ‘protection dog’ after her friend Katie Price got burgled. Protection dogs are intensively trained to protect their owners against home invaders and can cost up to £40,000.

Do You Know Any Celebrity Labrador Owners?

Do you know of celebrity Labrador owners? Let us know in the comments below. We love labs of all shapes, sizes and colours, which is why we’ve rounded up some gorgeous Labradorable gifts for dog owners. 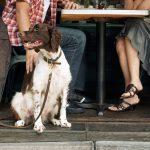 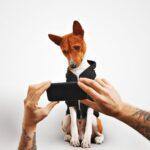