We all know how much of a dog lover Queen Elizabeth II was. She adored dogs of all shapes and sizes, but had a special fondness for Corgis.

In fact, during her reign, she had over 30 special dogs, Sadly, she has left behind two Corgis, one Dorgi who will now reside with Prince Andrew, and a Spaniel called Lissy who currently lives with her trainer, Ian Openshaw.

King Charles III grew up with dogs, and is just as much of a dog lover as his late mother. Alongside Queen Consort, Camilla they will begin their reign with their own beloved pooches by their side, Beth and Bluebell.

Beth and Bluebell are Jack Russell Terriers, adopted in February 2017 from the Battersea Dogs and Cats Home in London.

Previously while being interviewed by BBC Radio 5 Live, Camilla said: “The nice thing about dogs is you can sit them down, you could have a nice long conversation, you could be cross, you could be sad and they just sit looking at you wagging their tail.”

“Along I went to Battersea, and Beth appeared and she had just been moved from pillar to post and dumped,”

“We thought it would be nice for her to have a friend. They found [Bluebell] two or three weeks later wandering about in woods, no hair on her, covered in sores, virtually dead. And they nursed her back to life and her hair grew again. She’s very sweet, but a tiny bit neurotic, shall we say.”

The BBC also reported that the dogs are allowed “nearly everywhere” apart from sleeping on the bed. Beth and Bluebell are no strangers to being papped, as they both graced the cover of Country Life in July 2022. Both wearing pearl necklaces belonging to Camila.

Once renovation work is complete on Buckingham Palace, Beth and Bluebell will continue to reside with King Charles and Camila in Clarence House. Once the palace is fit for a King (and his dogs), they will undoubtably have their own room. Both pooches will both follow in the paw-steps of the late Queen’s canine companions. 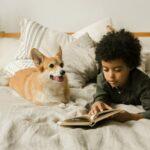 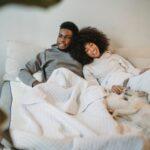