We all love pampering our pooches! However one dog groomer is facing a huge backlash from the dog loving community for his festive doggy makeovers.

Gabriel Feitosa, from San Diego appeared on This Morning recently to promote his dog grooming business and show the make overs he gives to his clients dogs. Examples include making dogs look like giraffes, mermaids and even the Grinch.

He appeared on the show alongside a dog who was dyed green to look like the Grinch.

Feitosa received a massive backlash from viewers who criticised him for the practice which they deemed as cruel. The groomer insists however, that the products used are dog friendly, vegan and non harmful to pooches but this has done nothing to quell the anger of his critics.

“I hate animals being used as props” fumed one angry viewer on Twitter.

Another reasoned, “Why are people stressing. If it’s safe then there’s no problem. The dogs are obviously not arsed”

I don’t agree with this at all. The dogs are made to look ridiculous. I hope this doesn’t encourage others who don’t who know what they are doing to dye their dogs too.

Feitosa has a following of over 60,000 on Instagram and he frequently shares images of the elaborate makeovers he gives to dogs.

This isn’t the only festive pet trend that’s causing controversy. In 2019 the Metro reported on “glitterballing“.

This involves attaching glitter to dogs testicles with corn starch. While the edible glitter and corn starch mean that consumption isn’t harmful to dogs vets still warn not to do it.

What do you think about these trends?

Is it okay to dye and glitter your dog or is it an irresponsible way to behave as a dog owner?

Let us know in the comments, we would love to hear your thoughts on the subject!

For more articles head over to Houndy, the place where you tell the tail. 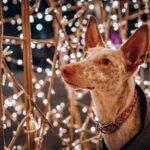